Alan Appelbaum, Research Affiliate in the Yale Department of Religious Studies and Program in Judaic Studies for the past three years, holds a Ph.D. from Yale and an M. A. J. S. degree from Hebrew Union College Jewish Institute of Religion. He is Senior Counsel to the international law firm of Cleary, Gottlieb, Steen & Hamilton LLP. His published work includes articles on Roman imperial history, the first-century Jewish historian Josephus, and the applicability of contemporary theory to rabbinic literature. 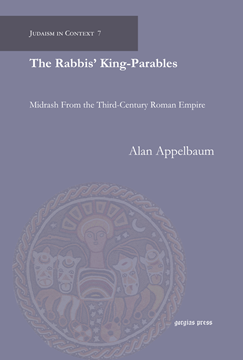 Midrash From the Third-Century Roman Empire

By Alan Appelbaum
Series: Judaism in Context 7
ISBN: 978-1-61719-159-6
The Rabbis’ King-Parables: Midrash From the Third-Century Roman Empire examines the ancient Rabbis at work using parables about kings; parables that reflect the Rabbis' ideas about the role of the ruler in society, and the relationship of humanity to God. It considers the parables as resistance literature in light of the work of theorists of dominated groups. It is the first systematic attempt to read the parables as sources for Roman history in over 100 years.
$199.00