Andreas Juckel is a Research Associate at the Oriental Department of the Institute for New Testament Textual Research, University of Muenster/Germany. His doctoral dissertation (1983, University of Bonn) provided an initial edition of Ktaba d-Durrasha (didactic poetry) of the East-Syriac writer Elija of Anbar. He is co-editor of the comparative edition Das Neue Testament in syrischer Überlieferung (cath. Epp. 1986, Pauline Epp. 1995-2002) and has published on textual criticism of the Syriac NT and on Syriac Lexicography. Inetje E. Parlevliet-Flesseman is a privat scholar who lives in Almelo/NL. She studied theology at the Groninger Universiteit and the Vrije Universiteit/Amsterdam and wrote a thesis entitled De Tekst van de Pesjitta in de Brief aan de Galaten (1993). Since 1992 she is associated with the Peshitta research of the Institute for New Testament Textual Research/Muenster.

By Andreas Juckel & Inetje Parlevliet-Flesseman
ISBN: 978-1-4632-4479-8
More than one hundred years after the publication of the BFBS volume of the Peshitta NT (1920), a critical edition of the Praxapostolos is still a desideratum. This edition fills the gap for the Corpus Paulinum. It expands the collations of the Scottish scholar John Pinkerton (1882–1916) up to some 60 manuscripts, incl. 5 lectionaries and 7 ‘masoretic’ manuscripts; it is based on the (slightly modified) BFBS text, which was established by the majority vote of Pinkerton’s collated manuscripts. The present edition turns the editorial principle of ‘majority vote’ into a textual history, considering the East-West-bifurcation of textual traditions, and the development of the Textus receptus by standardization. 9 printed editions are included, among which are 6 of the Textus receptus (incl. the editio princeps of 1555), thus covering the transmission of the Corpus Paulinum from the beginnings up to the 16th century.
$156.00 $109.20 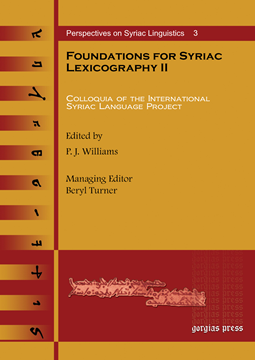 Edited by P. J. Williams; Managing Editor Beryl Turner
Series: Perspectives on Syriac Linguistics 3
ISBN: 978-1-60724-088-4
This volume is part of a series that addresses issues of Classical Syriac lexicography, and the lexicography of other ancient languages. The international team of authors invited to participate represents a wide range of disciplines and opens new horizons in lexical thinking. Essays in this volume discuss taxonomy, the Syriac passive participle, translating Greek verbs with alpha privatives into Syriac, the translation of Syriac particles, and the history of Syriac lexica. This book represents the forefront of Syriac lexical studies, and has much to offer those studying Greek and other Semitic languages as well.
$138.00 $96.60 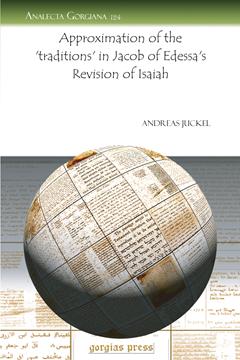 By Andreas Juckel
Series: Analecta Gorgiana 124
ISBN: 978-1-60724-036-5
This article contributes to the knowledge of Jacob of Edessa’s (d. 708) Old Testament revision by editing twenty texts (a total of 80 verses) from the Book of Isaiah and comparing them with the Greek recensions of the Septuagint, with the Peshitta, and the Syrohexapla. Two special features are introduced to set out Jacob’s revision technique in some detail: 1. comparison with an earlier undeveloped stage of Jacob’s revision extant in Ms Add 17,134 of the British Library; and 2. the distinction (by different colours and fonts) of the ‘traditions’ involved in the definite stage of his revision. Both features point to the emphasis given to the Peshitta in translating the substantial Greek text of the Old Testament.
$43.00 $30.10