Andrew J. Patton is a member of ITSEE in the University of and the ERC-funded CATENA Project. His research focuses on the development of the catenae on the gospels, investigating how the catenists constructed their commentaries from multiple sources—especially other catenae and a collection of scholia given the attribution ἐξ ἀνεπιγράφου. He has published in Novum Testamentum on the so-called ‘Western’ order of the gospels and collaborated on a catalogue of the Greek manuscripts in Birmingham. 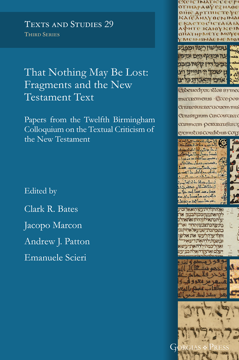 That Nothing May Be Lost

Edited by Clark R. Bates, Jacopo Marcon, Andrew J. Patton & Emanuele Scieri
Series: Texts and Studies (Third Series) 29
ISBN: 978-1-4632-4367-8
Fragmentary material comprises a significant part of the manuscript tradition of the New Testament. Whether it be tattered papyrus documents, the abbreviated citation of biblical texts in early Christian writings, or the scattering of once-whole manuscripts, the story of the New Testament is a gathering of fragments—in all their forms—in the hopes that “nothing may be lost.” This volume is a result of the Twelfth Birmingham Colloquium on the Textual Criticism of the New Testament, wherein presenters were invited to approach the theme of “fragments” from any philological or philosophical framework. Chapters discuss the possible forgery of a biblical papyrus, the dismemberment of a sixteenth-century lectionary manuscript, and the Arabic text of Romans preserved in a fragmentary bilingual codex. Elsewhere, software tools are employed to re-assess the readings of manuscripts digitised in decades past and to re-evaluate the stemma of a family of manuscripts. Further contributions consider the fragments of the biblical text contained in patristic commentaries and Byzantine catenae. The wide-ranging scope of the research contained in this volume reflects the need to examine these pieces of the past so that the shape of research in the present accurately illustrates the tapestry that is the history of the New Testament texts.
$114.95 $91.96