The Biblical and Apocryphal Christian Arabic Texts (BACA) brings to the scholarly world reliable editions of unpublished texts based on a single manuscript. In particular, the series produces edited volumes on Biblical and Apocryphal literature of the various Christian-Arabic ecclesiastical traditions, preceded by substantial introductory studies covering the socio-historical, theological, literary and linguistic aspects connected to the texts. The primary objective of the series is to present a varied and comprehensive map of texts that represent the rich and vast field of biblical and apocryphal literature in one of the Christian languages, Arabic. 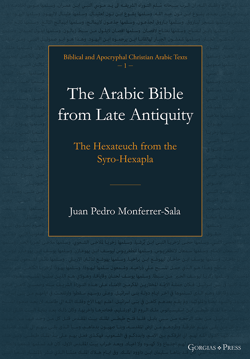 The Arabic Bible from Late Antiquity

The Hexateuch from the Syro-Hexapla

Edited by Juan Pedro Monferrer-Sala
Series: Biblical and Apocryphal Christian Arabic Texts 1
ISBN: 978-1-4632-4058-5
The biblical material translated into Arabic during the Middle Ages included texts from the Hexateuch contained in Codex Sinai Arabic 3, the first in the Christian Arabic Texts series now being published. This set of six texts (Pentateuch + Joshua) is of enormous interest, for what it tells us not only about translating into Arabic, and about the techniques and strategies adopted by the translators, but also about the revisions and reworkings to which the original translations were subjected, and in general about the transmission process undergone by biblical texts in the hands of successive copyists.
$149.50