Daniel Martin Varisco is an anthropologist and historian who conducted ethnographic fieldwork on traditional water resource use in central Yemen in 1978–1979 and historical research on Yemeni manuscripts in Cairo in 1983, Sanaa in 1985, and Istanbul in 1989. He has written about the history of Yemeni agriculture since the tenth century. He is currently writing a history of Rasulid-era agriculture with a translation of the agricultural treatise of al-Malik al-Ashraf ʿUmar (d. 696/1296). 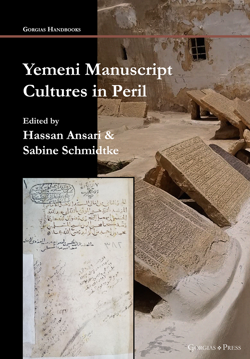 Edited by Hassan Ansari & Sabine Schmidtke; Contribution by Stefanie Brinkmann, Gabriele vom Bruck, Bernard Haykel, Brinkley Messick, Christoph Rauch, Anne Regourd, Valentina Sagaria Rossi, Karin Scheper, Jan Thiele, Daniel Martin Varisco, Arnoud Vrolijk & Zaid bin Ali al-Wazir
Series: Gorgias Handbooks 49
ISBN: 978-1-4632-4202-2
The most significant and by far largest collections of Zaydi manuscripts are housed by the many public and private libraries of Yemen, an endangered cultural heritage tradition, currently at risk due to the conflict and warfare in Yemen. The contributions brought together in this volume address a wide spectrum of aspects concerning Yemeni manuscript cultures, with some focusing on their history and present state within Yemen and others discussing the collections of manuscripts of Yemeni provenance in Europe and elsewhere.
$48.00