Giuseppe Mandalà gained his PhD at the ‘Istituto Italiano di Scienze Umane’ (SUM, 2009), and has subsequently been a postdoc fellow in London (The Warburg Institute), Paris (Laboratoire de Médiévistique Occidentale, CNRS) and Madrid (École des Hautes Études Hispaniques et Ibériques – Casa de Velázquez and CSIC). Since 2011 he has been a Scientific Researcher in ‘Cultural Transmission and History of Arabic, Greek and Hebrew Texts’ at the Spanish National Research Council (Consejo Superior de Investigaciones Científicas, CSIC) in Madrid. He is a specialist in medieval intellectual history and has published widely about the literary production in Arabic as well as in Hebrew, in particular on Sicily and its Mediterranean context. 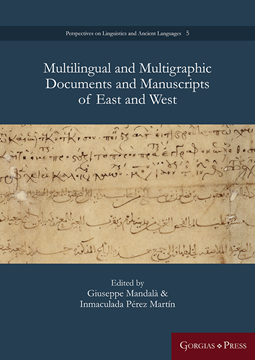 Multilingual and Multigraphic Documents and Manuscripts of East and West

Edited by Giuseppe Mandalà & Inmaculada Pérez Martín
Series: Perspectives on Linguistics and Ancient Languages 5
ISBN: 978-1-4632-0283-5
This volume deals with the evidence from manuscripts and handwritten documents with multilingual and multigraphic structures in Arabic, Hebrew, Latin and Greek, conceived and designed to display texts in different languages or scripts, as well as addressing the historical context of these testimonia (their production, use and circulation) and focusing on problems inherent to multicultural societies.
$228.69 $137.21