Isabel Toral-Niehoff studied History and Islamic & Arabic Studies at the University of Tübingen, where she completed her PhD in 1997 with a study on Greek-Arabic Magic: Kitāb Ǧiranīs. Die arabische Übersetzung der ersten Kyranis des Hermes Trismegistos und die griechischen Parallelen.She later completed her Habilitation (licentiate thesis) in 2008 at the Free University Berlin (Arabic Studies), with the publication of the book: Al-Ḥīra. Eine arabische Kulturmetropole im spätantiken Kontext (Brill: 2014). Since 1997, she has held various research positions and fellowships at academic institutions, including in Freiburg, Berlin, London and Göttingen. Her primary fields of interest are Arabia and the Near East in Late Antiquity; cultural identity and cultural contact/transfer; Arabic occult sciences; adab, fiction and encyclopaedias, and Al-Andalus. Since September 2016, she has served as scientific coordinator of the Excellence Cluster COPING PRACTICES at Mainz University and continues to teach at the Free University Berlin as Privatdozent since 2008. Her book on Al-Ḥīrawas recipient of the prestigious Iran Book Award in 2016. 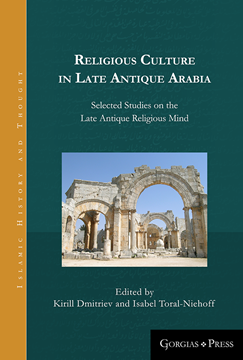 Edited by Kirill Dmitriev & Isabel Toral-Niehoff
Series: Islamic History and Thought 6
ISBN: 978-1-4632-0630-7
This volume explores aspects of religious culture in the Eastern Mediterranean and the Arabian Peninsula across Late Antiquity – the period of dynamic and historically crucial developments, culminating in the emergence of Islam. While it would be impossible to provide an exhaustive examination of the topic in a single volume, it is the main aim of this book to further stimulate scholarly research on the Late Antique context of the origins of Islam and the history of early Arab-Muslim culture.
$176.00 $105.60