James D. Moore (Ph.D candidate in Bible and Near Eastern Studies, Brandeis University) His primary research interests are in ancient Near Eastern scribal culture and the development of religious texts. He teaches writing seminar courses at Brandeis University on ancient scribal culture and on ancient myth and legend in modern cinema. He has published on the sacrificial system found in the Hebrew and Syriac versions of Leviticus, and he has contributed to Oxford Biblical Studies Online and The Routledge Dictionary of Ancient Mediterranean Religions among other publications. 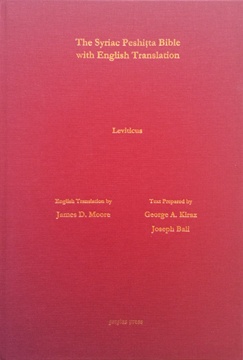 Leviticus According to the Syriac Peshitta Version with English Translation

English Translation by James D. Moore; Text Prepared by George Anton Kiraz & Joseph Bali
Series: Surath Kthob
ISBN: 978-1-4632-0468-6
This volume is part of a series of English translations of the Syriac Peshi?ta along with the Syriac text carried out by an international team of scholars.
$150.00