ASLIP was founded in 1986, under the leadership of Harold C. Fleming, to encourage international, interdisciplinary information sharing, discussion, and debate among human geneticists, paleoanthropologists, archaeologists, and historical linguists on questions relating to language origins and ancestral human spoken languages. One objective is to develop a taxonomy of human languages (a linguistic family tree) and reconstructions of major events in the evolution of modern humans. Alongside this, the complex evolution of physical humans—population movements, shared mutations, and archaeological discoveries—may be related to the linguistic family tree. The ultimate goal of ASLIP is to seek the best explanations as they pertain to the emerging synthesis about modern human origins. ASLIP is not committed to any single proposition. The ASLIP book series, Language in Prehistory, is dedicated to the publication of books that further these stated goals. 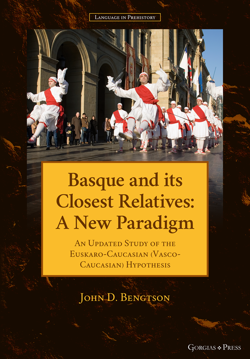 Basque and its Closest Relatives

By John D. Bengtson
Series: Language in Prehistory 1
ISBN: 978-1-4632-4411-8
This book is a comprehensive and detailed treatment of the Euskaro-Caucasian hypothesis – a proposal that the Basque language is most closely related to the North Caucasian language family.
$156.00 $124.80