Lionel Yaceczko is on the faculty of The Heights School in Potomac, Maryland, where he teaches courses at all levels in Latin and Greek. He studied classical philology at the University of Dallas and at the Catholic University of America, where he earned his PhD with a focus on classical education in the later Roman empire. His research attempts to bring a synthesis of documentary, material, and literary evidence to bear on questions relating to late antiquity. 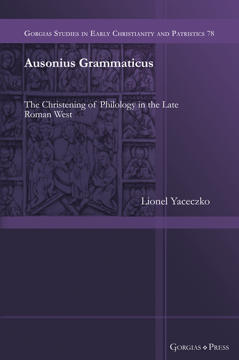 The Christening of Philology in the Late Roman West

By Lionel Yaceczko
Series: Gorgias Studies in Early Christianity and Patristics 78
ISBN: 978-1-4632-4280-0
The present volume describes the rich and complex world in which Ausonius (c. 310–395) lived and worked, from his humble beginnings as a schoolteacher in Bordeaux, to the heights of his influence as quaestor to the Emperor Gratian, at a time of unsettling social and religious change. As a teacher and poet Ausonius adhered to the traditions of classical paideia, standing in contrast to the Fathers of the Church, e.g., Jerome, Augustine, and Paulinus of Nola, who were emboldened by the legalization, then the imposition, of Christianity in the course of the fourth century. For this position he was labeled by the 20th-century scholar Henri-Irénée Marrou a symbol of decadence. Guided by Marrou’s critical insights to both his own time and place and that of Ausonius, this book proposes a hermeneutic for reading Ausonius as both a fourth-century poet and a fascinating mirror for his 20th-century counterparts.
$114.95 $80.46