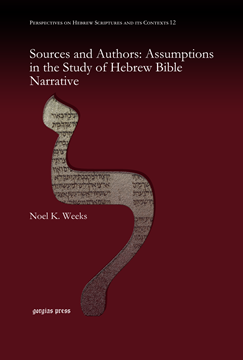 Assumptions in the Study of Hebrew Bible Narrative

By Noel K. Weeks
Series: Perspectives on Hebrew Scriptures and its Contexts 12
ISBN: 978-1-4632-0034-3
The foundational period of Hebrew Bible scholarship promulgated the assumption that the original “authors” were incapable of the sophisticated literary technique displayed in that work. Complexity was ascribed to a later stage. Yet in that later stage the supposedly more sophisticated redactors were unable to see blatant contradictions and redundancies. This work investigates Genesis, Judges, Samuel, Kings, and Chronicles looking at how the message conveyed has been misunderstood through assumptions about the capacities and intentions of original writers. It shows how retaining the assumptions about the inability of early writers inevitably leads to conclusions of a late provenance.
$206.00