PETER KARAVITES is Professor Emeritus of Greek and Roman History from Bridgewater State College in Massachusetts. His books include Capitulations and Greek Interstate Relations; Promise Giving and Treaty-Making, Homer and the Near East and Evil, Freedom, and the Road to Perfection in Clement of Alexandria. He holds an M.A. from the University of Chicago and a Ph.D from Loyola University of Chicago and has studied at the Universities of Munich and Heidelberg. 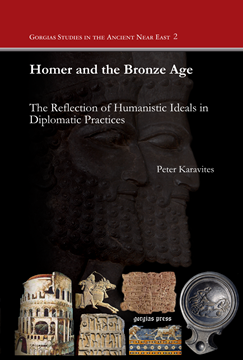 Homer and the Bronze Age

The Reflection of Humanistic Ideals in Diplomatic Practices

By Peter Karavites
Series: Gorgias Studies in the Ancient Near East 2
ISBN: 978-1-59333-985-2
Peter Karavites presents a revisionist overview of Homeric scholarship, whose purpose is to bridge the gap between the “positivist” and “negativist” theories dominant in the greater part of the twentieth century. His investigation derives new insights from Homer’s text and solves the age old question of the relationship between Homer and the Mycenaean age.
$148.00