The Syriac Studies Library brings back to active circulation major reference works in the field of Syriac studies, including dictionaries, grammars, text editions, manuscript catalogues, and monographs. The books were reproduced from originals at The Catholic University of America, one of the largest collections of Eastern Christianity in North America. The project is a collaboration between CUA, Beth Mardutho: The Syriac Institute, and Brigham Young University. 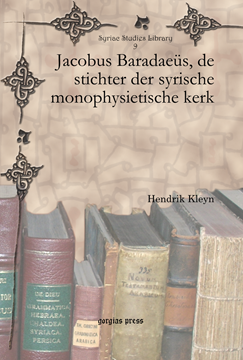 By Hendrik Kleyn
Series: Syriac Studies Library 9
ISBN: 978-1-60724-783-8
In this study, H. G. Kleyn deals with the life and works of Jacob Baradaeus and the role he played in the “monophysite” church to the time of his death in 578, including a thorough outline of Jacob’s writings.