T. C. Schmidt (Yale PhD) is the Assistant Professor of New Testament and Early Christianity at Fairfield University. He has broad interests that touch upon the historical Jesus, the formation of the New Testament, patristic eschatological thought, and the history of Christianity in Syriac and Arabic contexts. He has published the following volumes: Hippolytus of Rome: Commentary on Daniel and ‘Chronicon’ (Gorgias, 2017); Revelation 1-3 in Christian Arabic Commentary (Fordham, 2019, with Stephen Davis and Shawqi Talia); Revelation and its Eastern Commentators: Making the New Testament in the Early Christian World (Cambridge, 2021); Isho’dad of Merv: Commentary on Daniel (Gorgias, 2022); Cassiodorus, St. Gregory the Great, and Anonymous Greek Scholia: Writings on the Apocalypse (CUA, 2022, with Francis X. Gumerlock and Mark DelCogliano). He is currently preparing a monograph for Oxford University Press on the ancient Jewish historian Josephus and his description of Jesus.

Isho‛dad of Merv: Commentary on Daniel

By T. C. Schmidt
Series: Texts from Christian Late Antiquity 62
ISBN: 978-1-4632-4278-7
Ishoʿdad of Merv’s (fl. 850 AD) Commentary on Daniel provides an important witness to East Syriac exegetical technique. In it Ishoʿdad typically emphasizes an historical reading of the Old Testament above any kind of allegorical, spiritual, or even Christological interpretation. Most notable is Ishoʿdad’s belief that the Maccabees fulfilled several of the visions described in the book of Daniel, even including the Heavenly Kingdom of Daniel chapters 2, 7, and 8, and the physical resurrection of Daniel 12. These interpretations dramatically depart from most eastern and western commentators who considered Daniel’s visions to portend the rise of the Roman Empire and the advent of Christ. Ishoʿdad’s commentary is translated here into English for the first time.
$95.00 $66.50 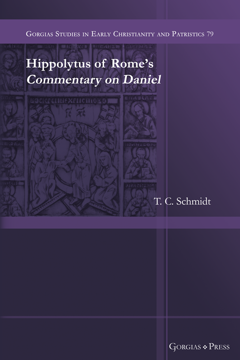 Hippolytus of Rome's Commentary on Daniel

By T. C. Schmidt
Series: Gorgias Studies in Early Christianity and Patristics 79
ISBN: 978-1-4632-4436-1
In his Commentary on Daniel, the earliest extant Christian commentary, Hippolytus interprets the deeds and visions of Daniel against the backdrop of contemporary Roman persecution and eschatological expectation, thus providing much information about Christian affairs in the early third century. Throughout the commentary Hippolytus further discusses his distinctive Logos theology and also makes mention of various liturgical practices evolving baptism, anointing, the celebration of Easter and perhaps the date of Christmas.
$37.00 $29.60 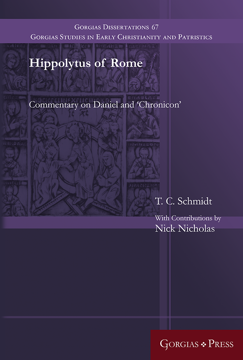 Commentary on Daniel and 'Chronicon'

By T. C. Schmidt; Contribution by Nick Nicholas
Series: Gorgias Studies in Early Christianity and Patristics 67
ISBN: 978-1-4632-0658-1
This volume contains an English translation and introduction to Hippolytus of Rome's Commentary on Daniel and his Chronicon. Both works are the first writings of their kind. The commentary is the earliest extant Christian commentary on a book of the Bible and the Chronicon is the first extant Christian historical work.
$160.00