Dr. Moreen is a scholar of the history and culture of pre-modern Jewry. Born in Romania, she earned her B. A. from Princeton University (Near Eastern Studies) and Ph. D. from Harvard University (Near Eastern Languages and Civilizations). She has the broad linguistic and cultural background to research the ancient and complex history of Iranian Jewry. She taught courses in Islamic Studies at numerous colleges and universities, including Swarthmore College and Franklin & Marshall College, and is the author and editor of several books and numerous scholarly articles. 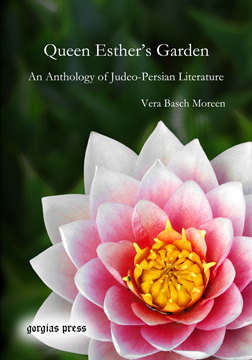 An Anthology of Judeo-Persian Literature

By Vera Basch Moreen
ISBN: 978-1-4632-0161-6
This anthology brings to English-language readers the riches of the Judaeo-Persian literary tradition produced by the Jewish community of Iran between the eighth and nineteenth centuries. Most of the translations were prepared specifically for this anthology from unpublished manuscripts. Extensive notes accompany each selection to clarify its meaning in Jewish and Islamic history and legend.
$130.00 $78.00