F.E. Warren (November 10, 1842 - December 20, 1930) was a Church of England clergyman and a fellow, and later Vice-President, of St. John's College, Oxford. Later he left the college to pursue pastoral ministry in a number of parishes. Warren was very interested in the early Irish and Anglo-Saxon Churches. He prepared the earliest critical editions of a number of important liturgical works of the British Isles. Among these The Liturgy and Ritual of the Celtic Church is the most important and still today retains its relevance. 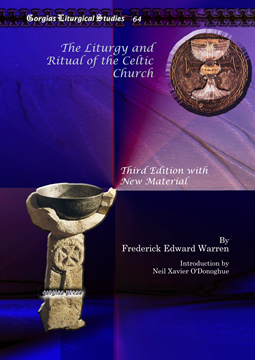 The Liturgy and Ritual of the Celtic Church

By Frederick Edward Warren; Introduction by Neil Xavier O'Donoghue
Series: Kiraz Liturgical Studies 64
ISBN: 978-1-60724-100-3
This is a new edition of Warren's classic study on the Liturgy and Ritual of the Celtic Church. A new introduction and up-to-date bibliography is provided. In addition two other important editions of early Irish liturgical books are reproduced in this volume: Bartholemew MacCarthy's edition of The Stowe Missal and Whitley Stokes edition of an old Irish Tractate on the Consecration of a Church.
$205.00 $143.50