Born in Ireland, the author’s family later migrated to England where he completed an undergraduate degree in Environmental Sciences at The University of East Anglia. Thereafter, a number of years were spent travelling the world; during that time many of the great archaeological sites in Europe, the Americas, the Middle East, Africa and Asia were visited. A long-held passion for ancient history was given a formal outlet when, having settled in Australia, he enrolled in the Faculty of Arts at The University of Melbourne: being awarded a First Class Honours degree from the Department of Classics and Archaeology in 1996, and a PhD from the School of Historical Studies in 2007. He is currently an Honorary Fellow at The University of Melbourne. 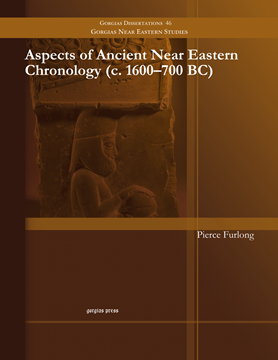 By Pierce Furlong
Series: Gorgias Near Eastern Studies 46
ISBN: 978-1-60724-127-0
There can be no more important topic in historical studies than chronology, for it is chronology which gives meaning to history by placing individuals, events and material remains within their true sequence. This work argues that the orthodox Ancient Near Eastern chronology is fundamentally wrong and that consequently the histories of the Great Kingdoms of Egypt, Babylonia, Assyria and Hatti, along with other minor kingdoms such as Israel/Judah, must be radically rewritten.